International Workshop-Day at The Peres Center for Peace 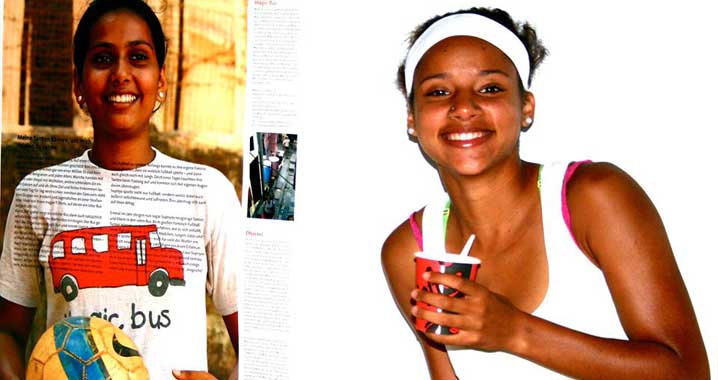 May 20, 2013 | On the 17th of July, the Peres center for peace hosted eight American high school Basketball players from Columbus Ohio, who came to Israel earlier that week to train and play basketball with their Jewish (from Be’er Tuvya) and Arab (from Jaffa) Israeli counterparts. This visit is following to a former visit that took place on March 2013 when the Israeli youth joined their American counterparts in Washington, USA.

During that day the Peres center for peace, held 2 workshops as part of the planned activities. In the morning of that day a “Through life with a ball” workshop as a tool for bringing the youth together and getting to know each other more closely. The stories of the girls on the posters helped the American and the Israeli youth to share their own life experiences and as the discussion got more intense, issues like stereotypes, discrimination, the importance of role models, social responsibilities and other life challenges were discussed among the teens.

In the afternoon on that day, a second workshop was realized based on the FOOTBALL3 methodology but this time it was used in a Basketball game. The 2 mixed teams (American-Israeli), needed to set some rules to the game of basketball that would make the game fairer and more collegial, for example: having to pass to all teammates before shooting, Or not more than two dribbles before passing the ball. In the end of the workshop one of the players said: “It was easy to say but not so easy to do because during the game you have so many temptations and you only think about wining and shooting as much as you can, but you don’t think about how you will reach that goal…” In the post match discussion both the youth and the coaches said that they realized how the communication among the players has an important role in the game. They all agreed how important it is to know your teammates, to see them and to include everyone during the game in order to win a fairly and meaningful game. It’s not only about how many baskets you shot but how many fair play points you gain.

Second Seminar: “Mediation in sport as a tool for education” at Formação 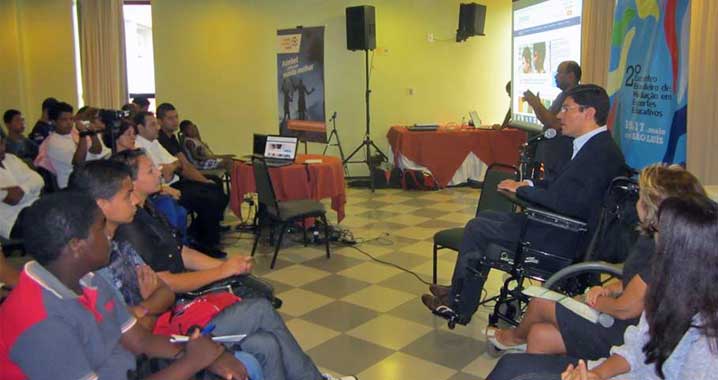 May 20, 2013 | From May 15 – 17, the international seminar titled, “Meditation in sport as a tool for education” took place at Formação. Over 150 experts from 20 organisations in Brazil and other Latin American countries met at the Instituto Formaçao in Maranhão, Northern Brazil.
The seminar focused on the exchange of knowledge, possible shared activities having to do with the 2014 World Cup and the 2016 Olympics, an exploration of the (social) impacts of these two major events, possible strategic alliances, and the growing potential for the further development of gender equality in various sectors of society. In addition to this theoretical work, there was also a large street football festival held for young people from across the region.

KICKFAIR was also invited to this event and, with the help of Formação, presented the concept of the international learning partnership that exists between the two organisations and their partner schools. Julia Wöhrle also presented KICKFAIR’s educational approach and held a discussion with participants on the various roles connected to mediation.
The seminar was organised by Instituto Formaçao, UNICEF und streetfootballworld Brazil. More information is available at www.formacao.org.br.

May 19, 2013 | Students from the Wulfen Comprehensive School met in the city of Münster from May 16 – 18 to prepare for their upcoming meeting with partner school CEMP and partner NGO Formação. From August 29 – September 10, young people from Wulfen will travel to Sao Luis as part of the ENSA school exchange programme. There, they will meet with participants of the same age from their partner school, CEMP, to learn from and share experiences with one another.
Participants used the two-day seminar to learn about Formação’s work and to discuss the theme of inclusion. They also had the opportunity to exchange directly with Camila, who is currently at KICKFAIR as part of the ASA North-South project.

She and her German ASA partner, Janina, will also be attending the meeting in Brazil. At the end of the seminar, questions were answered and participants shared their fears, wishes and visions. This left many with a good feeling upon returning home, and with much excitement for their upcoming time in Brazil. 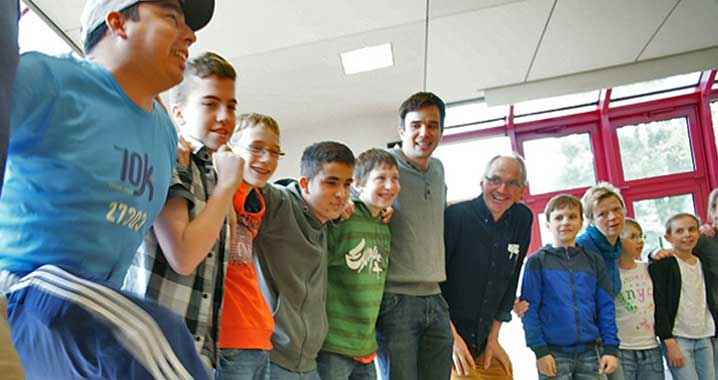 May 06, 2013 | A two-day meeting with FLG schools from all over Germany took place from April 29-30 in Ostfildern. More than 70 students and teachers attended the meeting, which has evolved into a solid tradition over the past few years. It provides an enriching opportunity for exchanging experiences in educational work through street football.

During teacher workshops, schools presented and discussed their experiences from the past year. In addition, participants compared various possibilities, such as the possibility to integrate social and global learning into classrooms and into daily life at school.

Parallel to this, students discussed their visions and experiences of street football with Juan from Chile and Camila from Brazil, two experts from the South.

Another focus was the 2014 World Cup in Brazil. Participants shared and developed different ideas, such as how the World Cup could be used as an opportunity for global learning and exchange between FLG schools from different countries.

Start of workshop series with the international youth leaders 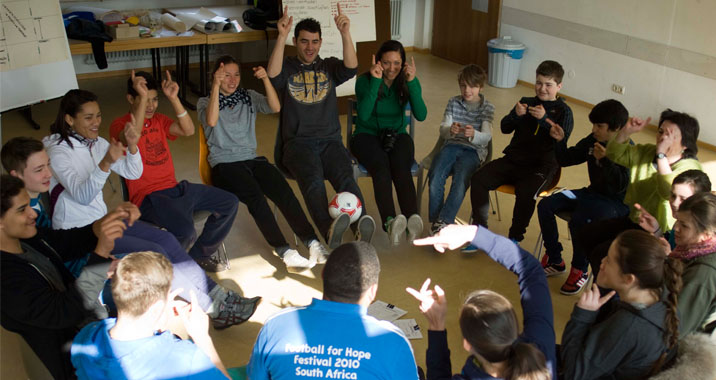 April 17, 2013 | After two days of getting acquainted, exchanging ideas and planning, the youth leaders from Chigol, Formacao and KICKFAIR started a series of workshops in schools across Germany. They worked intensively for three days with students in the Hauptschule Scharrerschule Nürnberg in Forchheim on the theme of mediation in street football.

They developed a vision for how the understanding of fair play could be carried over into their community and into daily life at school.

April 14, 2013 | 220 students in Teltow held their project week just before the Easter break, with the title “Intercultural Encounters.” The goal of the project was to overcome divisions between class, to promote fair social interaction and to solve problems by working as a team. In pairs, students researched interesting information about different countries and together produced a world map with the theme of intercultural exchange. By discussing the subject of racism in daily life, students were also able to reflect about their individual communities.

Angelina and Laura from the tenth grade showed a particularly strong commitment. With the help of the Vice Principal, Mrs. Pust, they led their own project group on the subject of street football and global learning. They shared their knowledge and experience gained from being involved in the learning partnership between the Mühlendorf Secondary School and Chilean schools and partner organisation CHIGOL.

By leading the project group, the two wanted to get younger students excited about the continuation and further development of the learning partnership with Chile.

Other young people were also involved in the project week, leaving for the final street football tournament trained as team leaders. All in all, participants considered the project week to be very successful. With the students’ leadership, the relay baton of football and global learning was passed on to younger students, ensuring that the knowledge and experience gained from Football-Learning-Global can live on at the school in the future.

March 28, 2013 | The documentation „gloBALL. Playing and learning without borders“ tells about the development and implementation of the worldwide streetfootball relay. An international youth leader team planned and organized the relay. Then the relay went through seven countries: Germany, Brazil, Chile, Paraguay, Argentina, Israel, Cambodia and Kenya.

All streetfootball events were organized by the youth themselves. Besides streetfootball tournements there were workshops about current issues of global learning.

Link to the documentation gloBALL 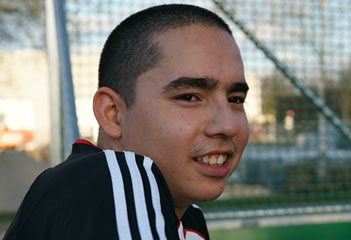 Hello, my name is Juan Burgos Catalán. I’m 24 years old and live in El Montijo in the community of Cerro Navia, Santiago de Chile. I’ve been part of the NGO Gente Viva’s CHIGOL project for seven years, working as a leader in schools and in the suburbs of Santiago. In 2005, I started the programme as a football player and, since then, I’ve had the opportunity to become a role model for children and young adults in my community.  In addition, I often act as a representative of my organisation in different activities, meetings,

festivals and conferences on an international level. I’ve accompanied our delegations to various events in countries such as Argentina, Germany, Paraguay, Peru, South Africa, Colombia, Costa Rica and Uruguay.  One of our goals is to generate development by creating meeting places where members of the community can meet one another and feel like part of the whole. 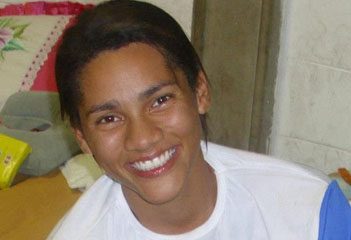 My name is Camila, I’m 24 years old and am studying sports at the university in Maranhao, with a focus on inclusive education. I would also like to continue on to complete a master’s and a doctorate in this field. Both my work and my daily life are connected to the world of sport, which has always been part of me. Someday, I would like to continue on to work in the field of sport. I think it is important to contribute to the development of children and young people, as they are the ones who will later have the opportunity to stimulate change in their schools and communities. I’ve been actively involved in Formacao since 2012 and work primarily in the field of sport and social development for children and young people. We work with various types of sport, such as athletics, handball, football or futsal.

December 7, 2012 | On 13th December, youth from Ostfildern, Israel and Palestine organize a joint street football tournament: Simultaneously young girls and boys get together here and there to play street football together and with it also to send a message for peace and friendship. Through photos and videos, the youth send each other opinions and messages live over internet during the tournaments that then get transmitted to the screen and to a common facebook-group.
The idea for a joint street football tournament came out last year. With the title “KICK FOR UNDERSTANDING- PLAY FOR PEACE“, the Peres Center for Peace developed a joint project with its project partners in Palestine and KICKFAIR, in which youth and youth leaders from all three organizations could learn together and from each other.

November 20, 2012 | The film “El Juego Del CHIGOL” explains the special method of playing Street Football with its 3 half-times. It shows also the different learning opportunities that are related to this method end the visions of CHIGOL as organization. The work on this film was started during a three-week stay of the German youth Leader Marcel Mauz at Chigol in Chile. The stay was realized with the support of the Federal Ministry of Interior (BMI) in the frame of their program “International Sport Projects”.

Since several years Marcel Mauz is acting as a youth leader in KICKFAIR. In this role he was intensively participating in the international documentary film project “Street Football – Together We Can”.

In this project Marcel developed a lot of competences regarding the whole process of producing films. CHIGOL made use of these competencies. Together with the youth team of CHIGOL Marcel developed the concept of the film “El Juego Del CHIGOL”. During his stay they also realized all the recordings of the film. In the following months Marcel and the youngsters from Chile finished the movie communicating via Internet.